A rather modern development in the world of guitars is the popularity of staggered tuners that claim to do away with the need for string trees.

Whether you’re trying to get rid of the buzz commonly associated with string trees or trying to work out what type of tuners will keep your guitar in tune the longest, there is one question you’re probably wondering:

Staggered tuners can work better because they remove string friction points, however you may not get enough string break-angle on higher strings which can cause further issues. The choice often comes down to your particular guitar and your playing style. Even with staggered tuners you may still need a string tree!

The Problem with Traditional String Trees

A string tree is primarily used to create a consistent downward pressure on your guitar’s strings. This is designed to keep your strings in tune and prevent buzzing and rattling at the nut, especially when playing open strings.

However, some problems can arise from having a string tree on your guitar, including:

The way a string tree can cause tuning issues with your guitar comes down to an excess of pressure on your strings, and extra friction points.

We all know how sensitive tuning a guitar can be. So it doesn’t take a lot to imagine what slightly too much pressure on your strings could do the tuning of your guitar.

This issue is exaggerated if you use a vibrato or whammy bar. An incorrectly balanced string tree can prevent the string from returning to its original pitch after a bend, causing a rapid change in tuning.

On the other hand, a string tree that is too loose can be detrimental to the sustain of your strings when playing open notes. If the string tree doesn’t provide the same amount of pressure that your fingers do when playing notes it can leave your open notes sounding quiet or unclear.

String trees can also create premature wear to the nut slots of your guitar.

If a string tree is creating too much pressure on the nut slots, it can wear them out allowing for the strings to unravel from the nut. Once again creating tuning issues.

The Problem With Friction

Whether you change a string’s pitch by using a whammy bar or by bending the string, this causes the string to stretch.

When a string stretches or relaxes it moves slightly at the nut and at the string tree contact points, and too much friction can cause the string to bind (stick).

If your string gets stuck at the contact points it won’t relax back to its original tension, and so will sound out of tune.

Different Types of String Trees to Help the Problem

String trees come in all kinds of different designs and materials that can solve some of the problems that come with using them.

One of the biggest issues with string trees is that they are usually made from stamped metal. 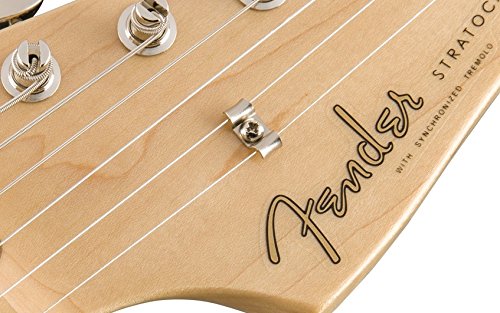 This means that every time the tension of the strings on the guitar changes; either through play, or the use of a whammy or tremolo arm, friction is created. This can cause wear to both the string and the string tree forcing them out of their ideal alignment.

A way to help this problem is to install a string tree made out of a different material. String trees made of something slicker such as Tusq or graphite can alleviate most of the friction-based issues that metal string trees present.

Another option is to use a different style of string tree entirely!

How Staggered Tuners Are Designed to Work

Staggered tuners are designed to eliminate the need for a string tree on the headstock of your guitar.

Instead of increasing the string break angle in the strings using a string tree, staggered tuners change the tuner height of each string to achieve the same result.

Staggered tuners are designed to make each tuner peg shorter than the last as they get further from the nut. This design keeps each string at the same level of tension without the need to guide the strings tighter as with a string tree.

In theory yes, using staggered tuners eliminates the need to use a string tree.

On a guitar that uses a string tree you will typically only see a string tree used on the highest strings E & B, and sometimes on the D & G strings.

This is because as the tuner pegs get further from the head the string has a further distance from the nut to lose pressure, with a more shallow string break-angle at the nut. This is a problem created by all of the tuner pegs being the same height.

Staggered tuners mostly fix this problem by making the pegs shorter as the strings get higher to make up for this distance, making the extra pressure created by the string tree no longer necessary.

Unfortunately, the only way to know for certain if this will work perfectly for your guitar and your playing style is to install staggered tuners and see how they work for you.

It’s worth speaking with a guitar tech before making a final decision, as their experience may guide you whether staggered tuners would solve the problems on your particular guitar.

Do Good String Trees Work as Well as Staggered Tuners?

String trees were the only option for guitarists with flat headstocks a long time before staggered tuners became available. If they are set up correctly they can absolutely provide you with a clear and consistent tone.

To answer this question there are a few questions you should ask yourself about your playing style and the guitar you use.

Bends closer to the nut are also something to look out for in your playing as bends lower on the fretboard put more pressure on the headstock. If you’ve got string trees these types of bends can create that unwanted friction known to put strings out of tune.

Another thing to consider is if your guitar has a whammy or tremolo arm.

Using a tremolo arm to bend your strings is notorious for putting excessive pressure on string trees causing tuning issues and premature wear. So if you’re a fan of using a tremolo arm you’re going to get better results from staggered tuners.

Some Problems with Staggered Tuners

The major problem with staggered tuners is that it is impossible to get the same break angle on higher strings that you can achieve from using a string tree.

While staggered tuners will give you a greater string break-angle than regular tuners, it’s not going to be as great as when a string tree is installed.

A shallow break-angle can sometimes lead to strings popping out of the nut.

How Much Do Staggered Tuners Cost vs String Trees?

The price difference between staggered tuners and string trees is notable, but not massive when considering how much a well set up guitar rig can set you back.

A set of new staggered guitar tuners can cost anywhere between $40 and $150 depending on your guitar and preference of brand and quality.

As a baseline, you can currently purchase official fender staggered tuners for around $55.

You can see a a range of tuners here at Amazon

String trees are less expensive to purchase than staggered tuners due to them being a single piece of hardware, instead of a 6 piece set required to install staggered tuners.

You can find official fender string trees for around $10, but even cheaper options are available. 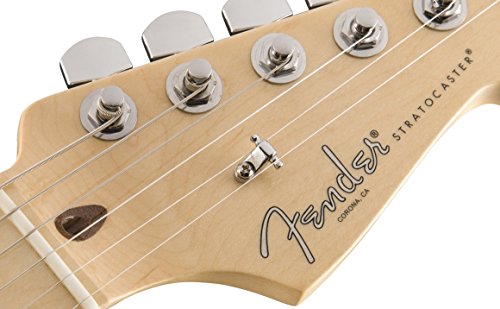 Another thing to note when considering the price difference is whether you are confident enough to install your new tuners yourself.

The labor involved in installing staggered tuners is a bit more complicated than installing new string trees, so if you’re not planning to install them yourself be prepared to pay a guitar tech for their time.

Ultimately this will come down to a few factors, such as how well your guitar will adapt to staggered tuners, whether string trees are causing you major tuning issues, and your playing style.

Staggered tuners will cost more than string trees, so keep this in mind if you are budget conscious.

If you’re leaning toward staggered tuners, I would suggest reading some forums and speaking to some guitar techs about your particular guitar before making your final decision.

A set of new staggered guitar tuners can cost anywhere between $40 and $150 depending on your guitar and preference of brand and quality. 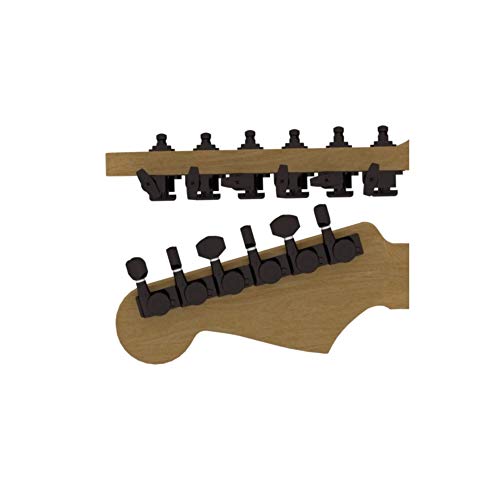 Guitar Nut Glue – What Is Best? (And How To Glue Them) Guitar String Snapped While Tuning (Find Out Why & Fix It)