The Fender Blues Junior is an amp loved by guitarists around the world. Especially those chasing that warm and classic Fender Tube Amp sound.

Its compact size is by no means evocative of its tone, it offers a massive and powerful sound that is ideal for both live and studio use. But do you know what sounds even better than a Blues Junior? A Blues Junior hooked up with the right guitar pedals!

Here are our recommendations for the best Overdrive and Distortion pedals to deliver a killer tone from your Blues Junior, as well as some of the best settings and techniques to master that growling blues and rock tone!

The Boss BD-2 Blues Driver first hit the shelves in 1992 intending to bring a compact way for more guitarists to achieve old-school blues tones. The fact it’s still one of their most popular stompboxes to this day is a testament to their success.

Its straightforward design makes getting your tone right a breeze; featuring level, tone, and, gain controls.

For a smooth but punchy overdrive try dialing the gain back, boosting the level, and adjusting the tone to suit your guitar. This will deliver a nice bit of crunch while letting the valves on your Blues Jr handle the rest.

Smooth overdrives aren’t the only highlight of this pedal. Anywhere past the 12 o’clock point will give you a nasty aggressive tone that shines on the Blues Jr.

For a super responsive overdrive, you’ve got to hear the Fulltone OCD in action! Released in 2004 its seen a couple of tweaks throughout the years but what’s special about it has remained the same. 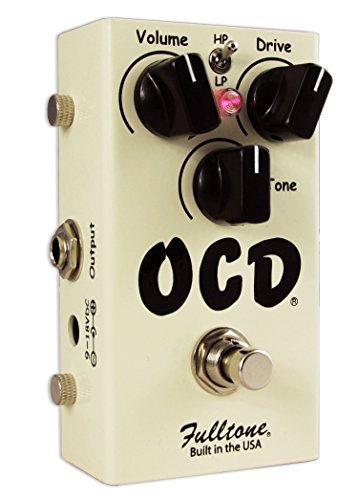 These changes gave the OCD a level of response not seen before on an overdrive pedal. The touch sensitivity on this thing is insane. The lightest touch produces a crisp and full-bodied sound while playing hard will make your amp growl without ever sounding artificial or over the top.

Paired with the Blues Jr, that touch sensitivity comes in handy when the volume knob is up high. Moving from soft playing too hard pushes the amp’s tubes into overdrive and sounds utterly classic

The Ibanez Tube Screamer is THE classic overdrive pedal. In fact, several pedal builders have been called out for ripping the design off and putting it in a new case!

As the name suggests the Tube Screamer was built to make your tube amp… scream. This makes it a perfect companion to your Blues Jr.

When people head to the music shop to test the Blue Jr out it’s a common sight to have the shop assistant bring out one of these pedals to show the customer what the amp is capable of.

The Tube Screamer is especially popular with Fender Amps because of its famed mid-hump tone boost. While Fender Amps are some of the best around they can often lack a well defined mid-tone. The Tube Screamer fixes with as it doesn’t boost your entire signal instead it focuses on creating a punchy mid-tone.

This makes the Ibanez TS9 an essential pedal for the Blues Jr as it punches a great sounding mid-range through the amp that it lacks otherwise. You’ll also need one if you want to sound like Stevie Ray Vaughan!

The first boutique pedal on this list is the Analogue Man King of Tone (KOT). Built by a long time user of the Ibanez Tube Screamer, the pedal looks to create the most tonally balanced overdrive pedal on the market.

This pedal is marketed to guitarists looking for the purest way to drive up the tone on their tube amp.

It doesn’t treat your tone with as much aggression as other overdrives and doesn’t scoop your low end as much. This gentler approach to overdrive doesn’t compress your signal as much and the results are a beautiful warm distortion when paired with an amp like the Blues Jr.

You’ll be hard pressed to find a pedal that approaches overdrive with this much appreciation for the natural distortion produced by overdriving an amp and because of that, they are difficult to get your hands on.

The Analogue Man KOT is handmade and the only way to get one is to join a loooong waiting list! (or just get a used one?) If you’re a tone purist trust me, it’s worth the wait.

If money is of no issue to you and you want to go straight to what pros like David Gilmore and Lou Reed swear by then look no further than the Pete Cornish SS-3.

This pedal doesn’t aim to revolutionize the tone of your guitar; instead, it retains its natural tone and breathes new life into it. Its mid-range is warm and transparent without adding any overly distinct coloring.

It also maintains your low end better than most other pedals out. This can be adjusted with the onboard low-cut and high-cut knobs to give you total control over your tone.

The tech inside this piece of gear is perhaps why it’s so expensive. Featuring a high impedance buffer preamp that helps prevent tone drain and RFI interference that is responsible for the spooky way distortion and overdrive pedals pick up radio signals.

The SS-3 maintains a price close to a grand but if you’ve got that kind of money to spend on an overdrive pedal this is the one to get!

If the idea of a pedal that is capable of being played lightly is pointless to you then this next one might be right up your alley.

The Turbo RAT is one of the most insane pedals you’ll ever hear in your life. The predecessor to the RAT Distortion pedal (which on its own was madness) the Turbo RAT features twice the output.

The best thing about it is: through the chaos there is a brightness unmatched by other pedals that have tried to claim its title as the most dangerous pedal ever made!

It achieves this by hard clipping your highs and lows while reducing the input of the mids slightly. This lets you wash your listers away in a wave of distortion while preserving the natural brightness of the Blues Jr amp.

Even if things do get a little hairy its filter knob can roll back the parts of your tone that are getting out of control. Roll off the lows to let its fuzz brightness shine or roll off the highs to puncture the souls of whoever happens to be standing within a mile of your amp.

The tiny Xotic SL Drive is based on the classic Super Lead and Super Bass amps used by legendary guitarists such as Jimmy Page and Paul Kossoff.

While it’s the smallest pedal on this list it’s one of the most dynamic. Its 4 EQ dip switches allow you to dial in your tone however you like. A common complaint amongst overdrive and distortion pedal enthusiasts is that some pedals scoop or boost certain tonal ranges too much or too little. This feature alone mends that. 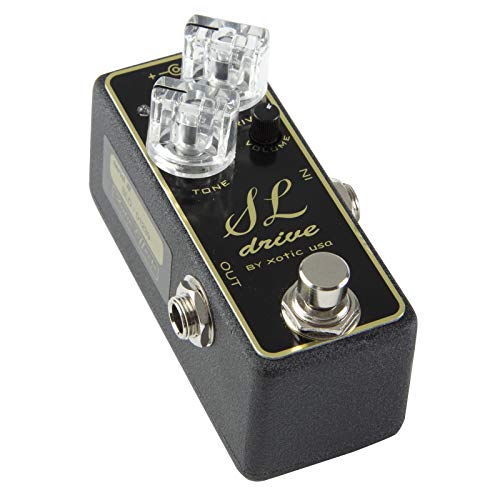 On top of this the SL Drive can be used in 2 primary modes; Super Lead and Super Bass.

The Super Lead setting pushes your tone with more gain and makes the pedal one of the most harmonically rich overdrives on the market. The Super Bass setting on the other hand drives the low end harder creating a deep rumbling tone while cutting the highs.

This is a great pedal if you want to find out how your Blue Jr handles a variety of different tones without buying multiple pedals. Electric Guitar Sounds Like Acoustic? How To Fix Your Sound!